Wet dog inc.
In this project, I collaborated with a small team to create a VR prototype in UE4. I was responsible for everything you see in the video below. In this prototype the player stands on a platform and utilizes various tools and items to wash, rinse, and dry dogs that are fed into the room on a conveyor belt.. The soft-body physics and real-time liquid simulations was accomplished using Nvidia's Flex library.

Mass Redistribution Prototype
In this prototype, object mass is the primary resource. The player is able to add or remove mass from objects in the level in order to solve platforming and physics puzzles.

TECH
If you haven't already guessed it, mass is just referring to the scale of an object. So the core mechanic of this prototype revolves around raycasting to objects and manipulating their scale parameters.
Below you can find the two blueprint graphs that make up this prototype. On the left is the cube actor blueprint, where the various cube parameters are stored. On the right is the character blueprint where the raycasting, ammo, and input logic are handled.

the tiniest GHOST
The Tiniest Ghost is a hand drawn Paper Mario-inspired RPG. The prototype was made over the span of a week for my local game jam. All assets (including UI) were hand drawn in Photoshop and animated inside UE4. I was responsible for all elements in the demo.

Button Mash mini game
In this project, the player is required to charge a generator by pushing a button as fast as they can. As the generator is filled, the difficulty level is increased requiring faster button presses.

TECH
In order for the player to trigger a win condition, they have to press the button at a rate faster than the time function multiplied by a difficulty modifier. As they charge each cell, the difficulty modifier incrementally increases the rate in which the player has to click to succeed. Once all cells have been charged, the win state is triggered, and the player can move on.
Below are the two blueprints that power the entire mechanic. On the left is the button actor which handles the animations and player raytracing. On the right is the main blueprint class that handles all the UX elements including sounds, UI, lights, and core logic. 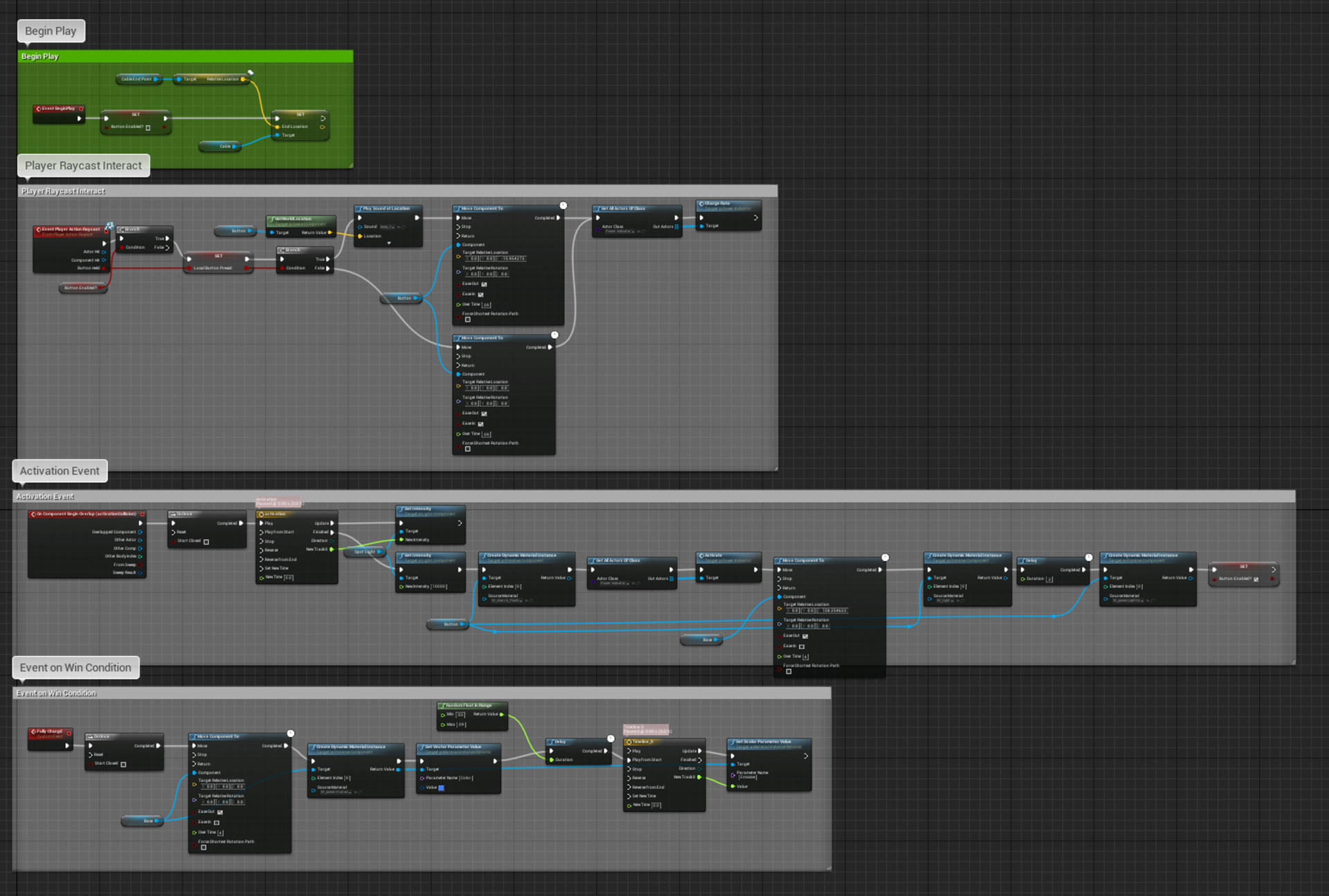 Bamboo Water Puzzle
Below is a puzzle mechanic that requires the player to fill a hydroponics tank to a predesignated level in order to trigger a win condition.

TECH
The tank is filled by holding down a button correspondent to each tank. Each tank has a unique, randomly assigned fill level that is communicated to the player via a note on the glass.
Below you can find the graph that controls the bamboo tank (sounds, FX, UI, and logic).

2D Puzzle platformer
This prototype was a small project I put together to experiment with using 2D sprites in 3D environments. The gameplay consists primarily of physics based puzzles and basic platforming.
The entire game space was made from a single instanced block blueprint, allowing me to easily prototype new level configurations, animations, and physics parameters. The player character was handled using a combination of UE4's Paper2D system and few custom functions I wrote in order to lock the player and camera along a single axis.

Insert copy here, which should vary depending on your region. Accept